You are here: Home / Mindset / The Voice In Your Head 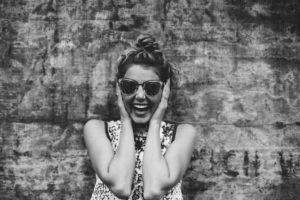 Ever wonder about the voice in your head? You know the voice, right?

It’s the voice of disgust when you look in the mirror, hear yourself speak, watch yourself perform, feel the clothes on your body, touch your skin, smell your breath.

You hear the voice, right? The voice that says you’re stupid, dumb, in the way, annoying, irritating, unlovable, unworthy, a pain in the ass.

Perhaps you probably believe the voice is your voice. It sounds like your voice, right?

I used to think that too.

The Voice In My Head

I thought I was the voice scolding me when I’d make a mistake, get into trouble, talk too much, didn’t do something good enough, didn’t get the right answer, wasn’t in shape enough, didn’t dress right, wasn’t talented enough, or thin enough.

I believed that I was the voice that drove me into years of self-deprecation, punishment, and shame.

Then one day I rebelled against the voice. I didn’t want to listen to it, hear it, or believe it anymore.

That’s when I got curious, still, and started listening to the voice in my head. I wanted to know it.

If it wasn’t me, who was it? The names and faces grew clear. I knew them well.

I laughed at the absurdity of listening to a voice that wasn’t me, a voice that didn’t even know me, and cried realizing the years of pain I’d tolerated believing a voice that definitely wasn’t speaking my truth.

Empowered, and with the help of a coach, I went to work evicting the voice that scolded, criticized, and judged me.

I began dumping all the negative thoughts the voice had fed me.

I started getting to know my voice by asking, “What do I think?” “What do I believe?” “What’s my truth?”

As I clarified my thoughts, my true voice strengthened. The sound was amazing!

The feeling of hearing my own voice in my head was and continues to be priceless.

The Voice in Your Head

So, what about the voice in your head? Is it your voice? If not, whose voice is it?

Does your voice speak your inner truth? Or, does the voice speak someone else’s false assumptions and accusations?

Is the voice guiding you toward what you want most in life? Or, is the voice squashing your hopes and stealing your dreams. Mostly, is the voice in your head a loving, compassionate voice?

If the voice isn’t your truest, most trusted advocate, companion, and sage, why do you listen to it? Why do you give the voice so much power?

I gave the voice in my head power for a couple of reasons.

One, I didn’t realize the voice wasn’t me, and two, I didn’t know or trust me enough to listen to my own voice.

I believed a voice that wasn’t true, gave other people my power, believed them, and took their voice as my own.

This didn’t serve me…and it doesn’t serve you either.

You don’t have to listen to the voice anymore, especially if it isn’t your true, loving voice.

Starting today, right now, you can begin to get clear about the voice in your head.

Begin by clarifying whether the voice in your head is actually your voice. In most cases, it’s not.

If the voice in your head reprimands you with negative, defeating messages, most likely, it’s not your true voice.

You’d never talk to someone else, especially someone you adore, the way you talk to you, right? That’s a sure-fire sign that the voice in your head is not your true voice.

Once you discover that the voice is not the voice of your true self, start dumping every single negative thought and belief the voice has ever told you. Get them all out and down on paper. Keep only the thoughts and beliefs that serve and inspire you well.

Next, fire-up your creativity by creating new, positive thoughts and beliefs that inspire and serve you well. I recommend recording your new thoughts and beliefs, then listening to them daily. This practice actually rewires your brain’s neural pathways. Really!

Hearing your true voice for the first time might feel uncomfortable. You might not believe your voice, or trust it. Why should you? It hasn’t shown up in a very long time, if ever.

Forgiving your voice for not standing up to the “other” voice in your head could take time. However, I can tell you it’s the best time you’ll ever give yourself. It has been for me.

In time, you’ll grow to love the sound of your voice.

The voice that says you’re perfect as you are now, in every way.