You are here: Home / Uncategorized / Out of the Shadow of Shame

We carry shame as long as we need to carry it. Often, we carry shame unaware…and even more so, unaware of when shame cast its shadow over us. Whereas events, relationships, and encounters often form the clouds of shame, each of us weathers shame differently. When or if we choose to lift the shadows of shame is individually and uniquely up to us.

I’ve been lifting the shadow of shame for some time. For years, I lived afraid to stand up for myself. Smile and nod were my attributes. I did what I was told, obeyed, never colored outside the lines, and if I faltered, quickly corrected my errors and polished my perfectionism. I never tested the rules or limits. I relied on alcohol and drugs for courage. I never took a stand. I allowed people to use, abuse, push, order, demand, and walk all over me. I complied. I did not question. I never pushed back.

After years of allowing shame to shadow my light, I wanted to live differently. I grew tired of living afraid. I wanted answers. Courageously, I went inside to find them. My journey led me to a painful event that I had ruminated on repeatedly over the years. The event took place when I was in the 6th grade. One of my elementary school girlfriends had grown tired of me; the transition to middle school altered our relationship further; we drifted apart.

One morning, as I walked to the girls’ locker room to put my gym clothes in my locker, I felt uneasy as a crowd of girls followed me in to the building. Naively clueless as to what was to unfold, I could see the largest girl in the 6th grade approaching me in way that signaled I was in trouble. My scrawny, flat-chested, pre-puberty body didn’t stand a chance. I was about to get, as we say in the south, “the shit kicked out of me.” I recall being pushed into the lockers. Beyond that remains a blur, except for the 7th grade girl, who was putting her things away in the locker next to mine, asserting, “You’ll have to go through me to get to her.” The crowd dispersed as quickly as it had formed. Whereas I am forever grateful to the 7th grade angel, I walked away feeling deep shame. I had not stood up for myself. I was a coward. 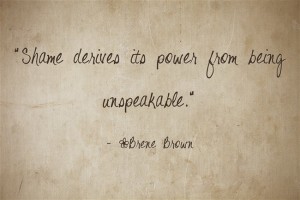 The shadow of shame cast over me from that event shaded me for years. I’d forgiven my friend and classmate. But discovered that I had not forgiven me. I was harboring anger toward me for not fighting back, for not standing up for myself, for not taking a stand…and without knowing, without insight, the shadow of shame followed me through life, relationships, and encounters.

I laughed through my tears with forgiveness. The clouds parted as insight moved me out of the shadow of shame and into the light. I basked in radiance and warmth. I declared aloud with a smile, “If that happened today, I’d fight back. I’d kick the shit out of those girls!” And even if I lost the battle, I’d go down fighting. But even if the episode played out the same, I would embrace that scrawny little girl and tell her, “It’s okay, honey. It’s not your fault. You didn’t deserve it. You did your best.” I would not allow the shadow of shame to block her light.

Shame loses its power in the light. Sure, sharing shame is scary; however, the surge of vulnerability that pulses through my body reminding me that I’m alive, worthy, and deserving is priceless.

Sharing shame shines an even brighter light on shame. Sharing our shame empowers others to share their shame. Collectively, we move out of the shadow of shame.